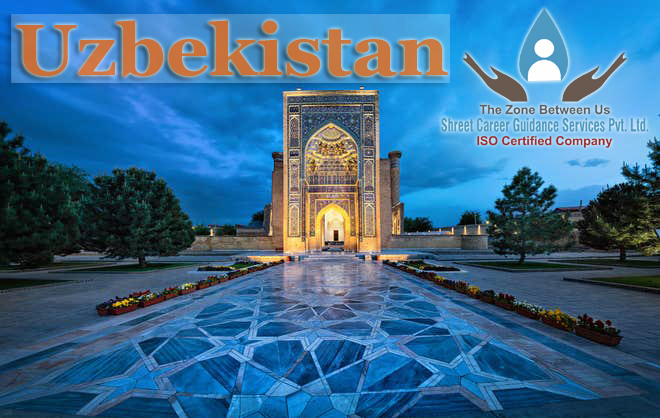 Things to do and places to visit in Andijan

Present day Andijan is largest city and the major center of engineering industry in Uzbekistan.  Andijan has a number of organisations administering manufacturing plants of automobile industry, fruits canning, milk industry, food preservation industry, cotton industry, textile factories etc. It is also the main oil-producing region of Uzbekistan. The other major features of Andijan which one can look forward to experiencing while there include advance education-training, medical education, cotton-farming institutes, local theatre of musical drama, puppet theatre, regional museum etc.

On a visit to the Andijan region while travelling in Uzbekistan you will get the chance to discover the historical architectural monuments like the Jami Complex, explore the ancient city of Mingtepa, located just 30 km from the Modern day city of Andijan. 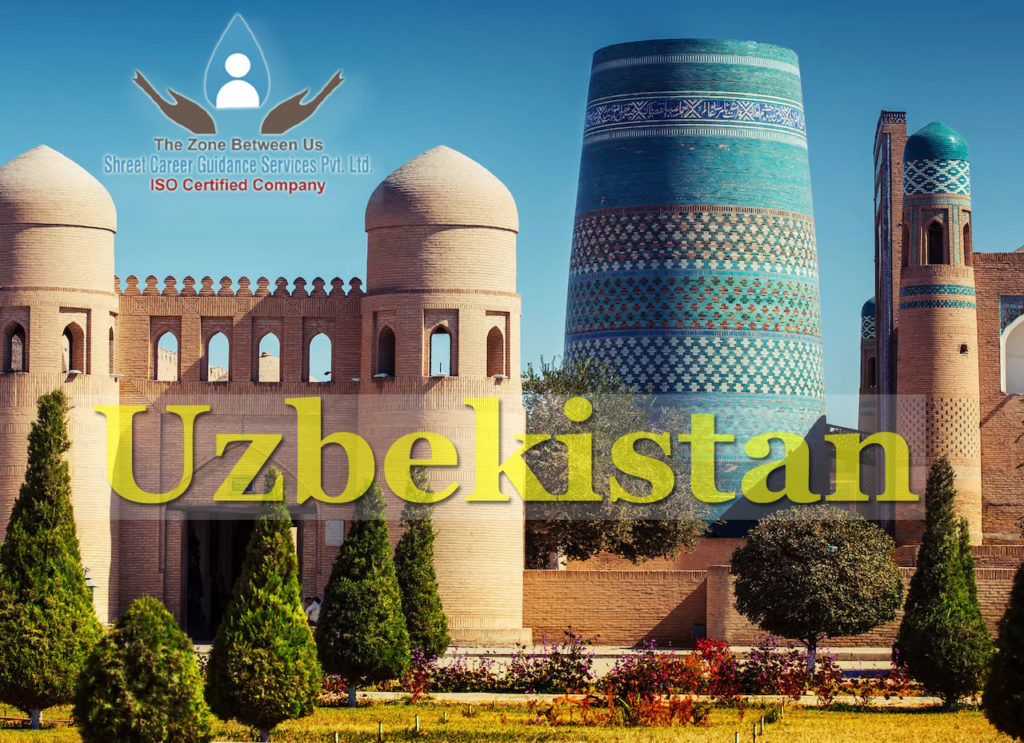 Andijan boast a national center for tourists, where you get the chance to stay in a guest house to experience the Uzbek lifestyle, see enthusiastic performances of rope walkers and get to know the splendid products of local craftsmen.

Andijon is probably the country’s authentic Uzbek city in terms of culture and etymologically, as well as the best place to observe Uzbeks lifestyle. Andijan has a glorious past and great future ahead with a number of collaborations with foreign countries for resources and development.

Andijan city is growing more and more popular each year among foreign travellers with development of new modern buildings, range of entertainment, shopping centres, green gardens, parks and alleys. For travellers interested in travelling back in time and experiencing the old world, there are more than 400 tourist sites located in the Andijan region. There are museums, parks, archaeological and historical monuments, pilgrimages, as well as picturesque sceneries and unique recreation centres. 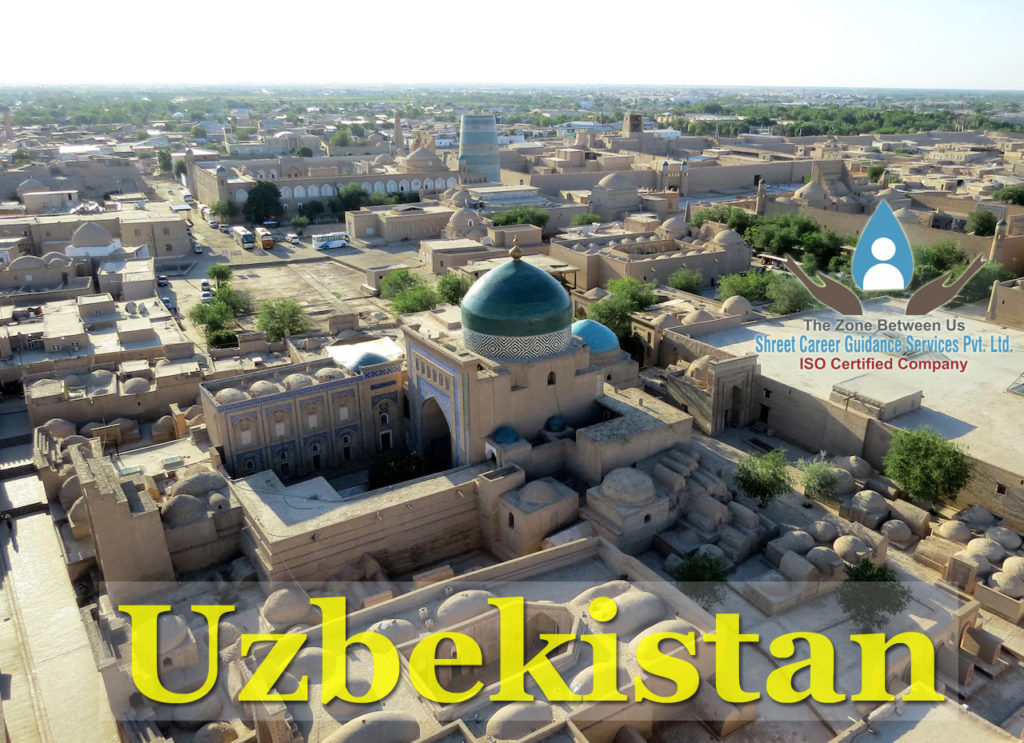 Located in the Eastern part of the Ferghana valley, Andijan served as the eastern gateway for the silkroad. The region is the smallest region in Uzbekistan by area, but is the most densely populated.  Surrounded by picturesque hills and Located on the Great Silk road in ancient times the city is also known as the birthplace of Zahiriddin Muhammad Babur the founder of the Mughal Empire in India, the Uzbek poet and writer.

The foundation of Andijan city first began with the mention of an ancient city “Davan “through Chinese writings which talked about a city complex that existed here in the 6th century, where agriculture was done with artificial irrigation and “Sky horses” were bred. Andijan is also known for its holy places and famous shrines including Imam-Ota, Tuzlik Masar, Ok Gur, spring Shirmanbulak.

Popular Places to visit in Andijan 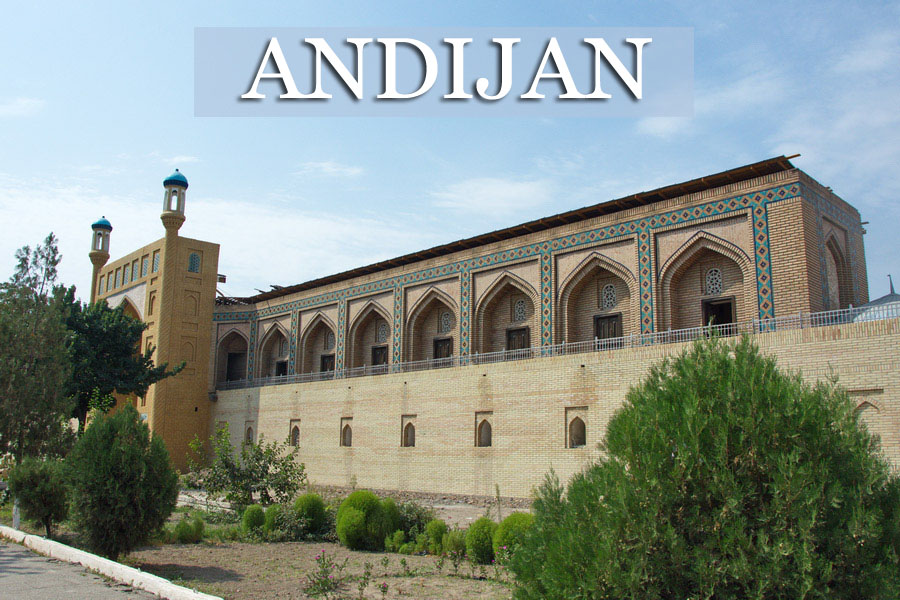 Jami complex comprises of a mosque, minaret and madrasah. Jami madrasah is not only an important historical monument, but also an architectural masterpiece displaying the artistic woodcarvings skills of the Fergana masters.  The domes of the building are decorated with mosaics of characteristic Eastern blue and light blue colors and the mosque ceiling is painted with different patterns which merge traditional geometric designs and floral ornate.  The Jami complex is considered to be the largest building in Fergana valley and in Central Asia. 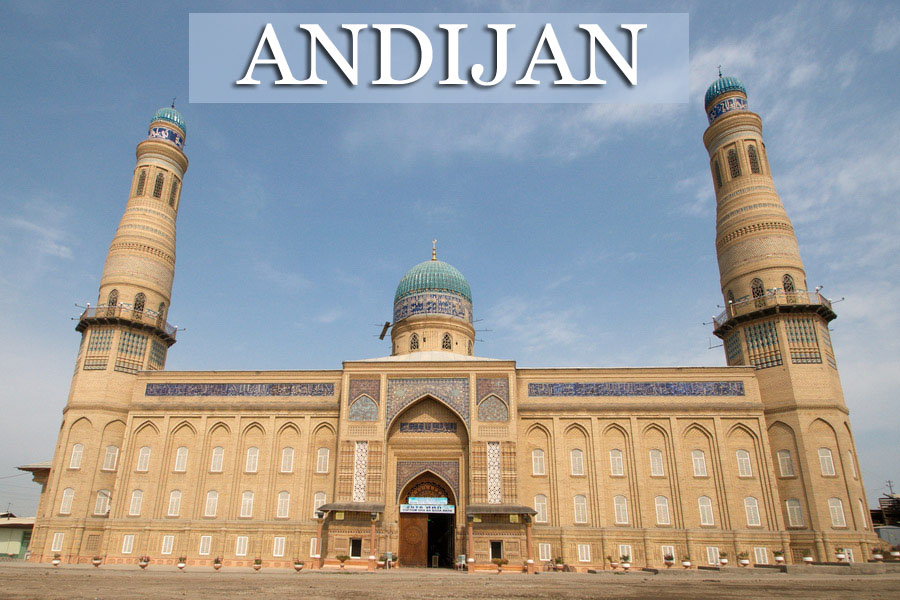 Ancient settlement of Ershi near Andijan

Fergana Valley is among the most ancient regions of Central Asia.  According to the Chinese source, Davan the current day Fergana Valley had more than 70 cities in the past and the capital of the city was Ershi was located around 30 km away from modern Andijan. Ershi was a city on the Great Silk Road with great commercial occurrences and the local people were well known for their trading skills.

Davan State was described as a country with developed agriculture through artificial irrigation system. Plenty of vineyards were found near Ershi city and Local people manufactured wine. Farmers also grew alfalfa which was exported mainly to China. Horses of Fergana were also in great demand. Out of them Argamak horses were the most famous and the breed was most popular among the aristocracy of neighbouring countries.

Ershi City was renamed to Mingtepa during the Turkic period in the middle Ages. Fading trade activities on the Silk Road resulted in the decline of the great city and over time people moved and built a new city on the site of modern Andijan. Today, the ruins of the Mingtepa settlement are 30 km from Andijan and a great place to experience the old world charm of the Great Silk Road. 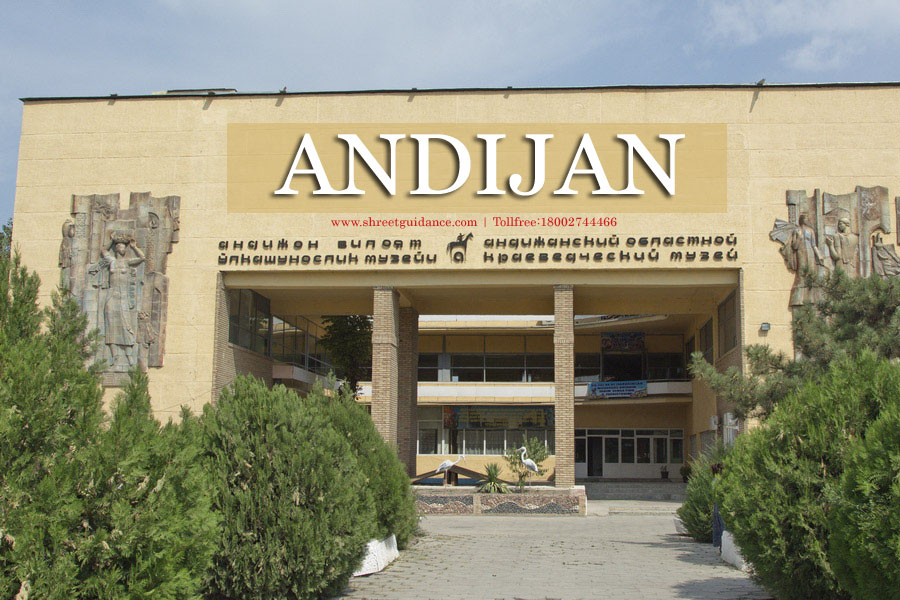 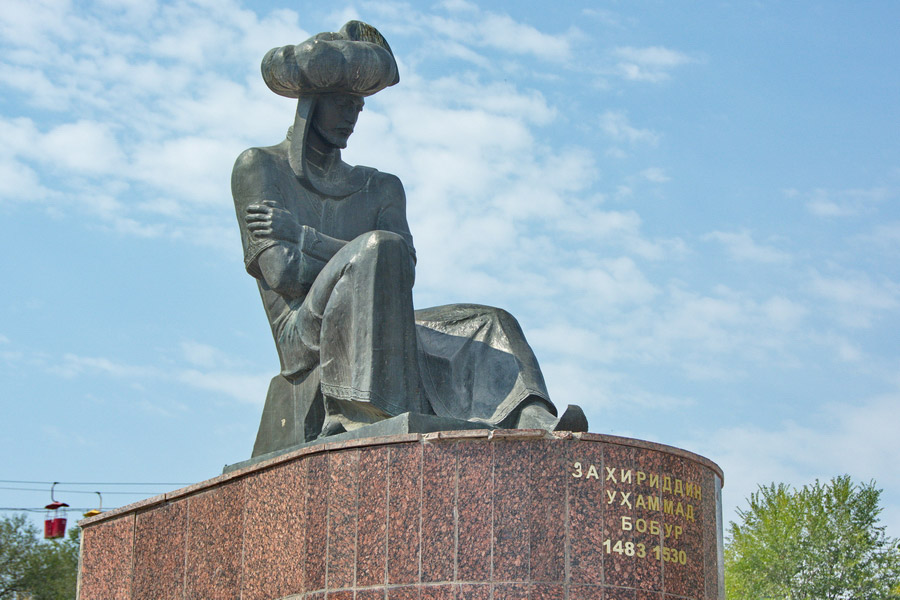 Andijan is the birth nation of Babur and a whole memorial park complex located on Bagishamol hill at the south-east of Andijan has been developed here dedicated to Zakhriddin Muhammad Babur. This memorial includes an architectural and historical complex which according to the famous memoirs of “Babur-name” was built by the famed Andijan architect Mavlono Fazliddin on command as a summerhouse for meditation, where Babur rested in his youth. The House-Museum named after Babur has rare exhibits connected with life of Babur and Baburids’. The park is lined with plants from all over the world with 50+ species of trees and most stunning flower species. A ropeway is stretched from park to Bogishamol hill top, which presents a magnificent panorama view of the park and the city. 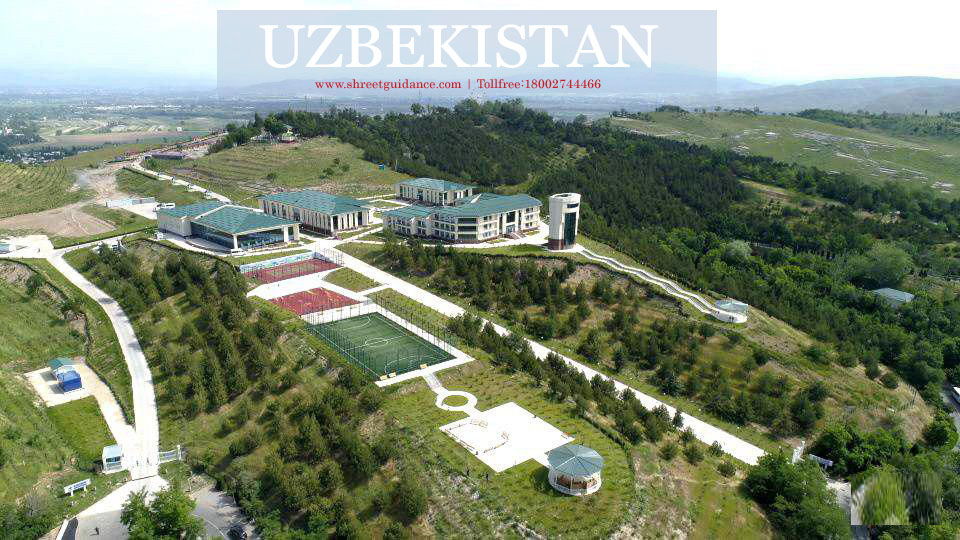 Khanabad is located in the eastern region on the coast of the Karadarya River of Andijan. Here there is a unique medical sanatorium built on an area of 10.5 hectares.  Khanabad Sanatorium is a recreational resort specializing in the treatment of chronic diseases. Patients suffering from diseases of respiratory tract, nervous system, cardiovascular system, chronic gastrointestinal, gynecological and urological, as well as bones and joints, are treated here through oxygenated & ionized air therapies, mineral baths, physiotherapy, electrophoresis, galvanization, acupuncture, halotherapy, and several other recreational procedures. People also visit this medical resort just for good rest and rejuvenation. 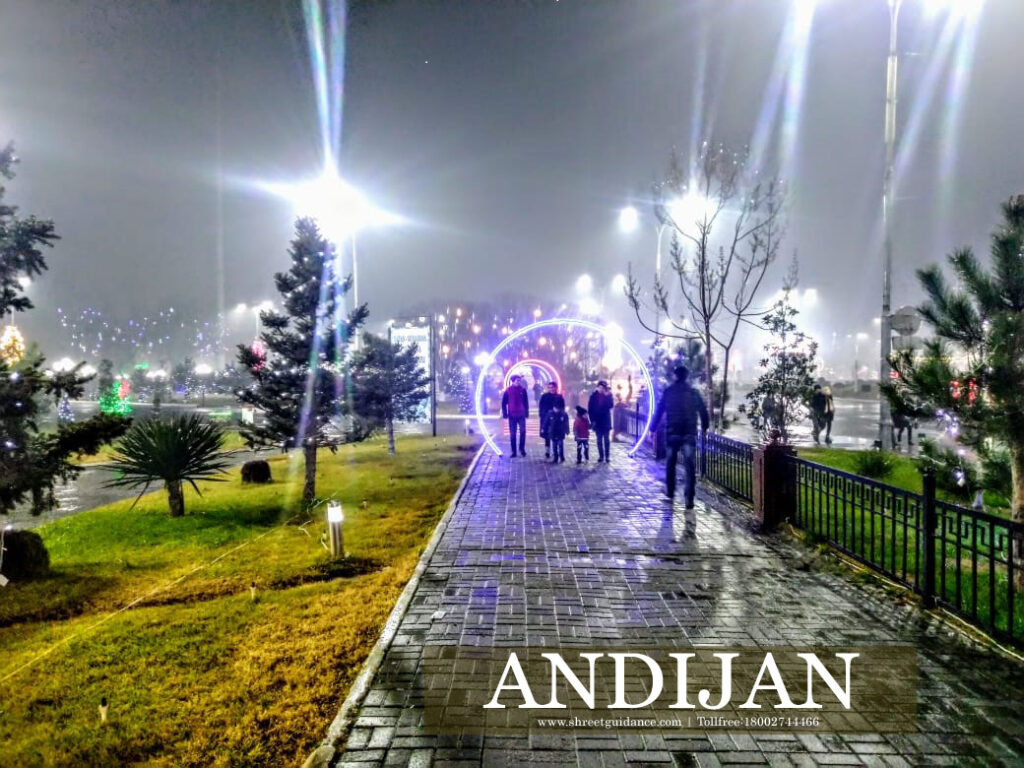 Benefits of studying in Andijan Uzbekistan

Andijonian people are warm, friendly, respectful and well cultured who treat other communities with respect. Uzbekistan is surprisingly a cosmopolitan country with liberal views with great gender equality and safety of girls. Uzbekistan is an emerging economy with exponential growth opportunity. Students and expatriates from all over the world live here, contributing towards highly diverse and welcoming environment for studying MBBS in Uzbekistan.

Uzbekistan has branches of Indian Universities in the country and also has partnerships with Indian universities. Direct flights operate from India to Uzbekistan with travel duration of only 3 hours via Uzbekistan Airways. 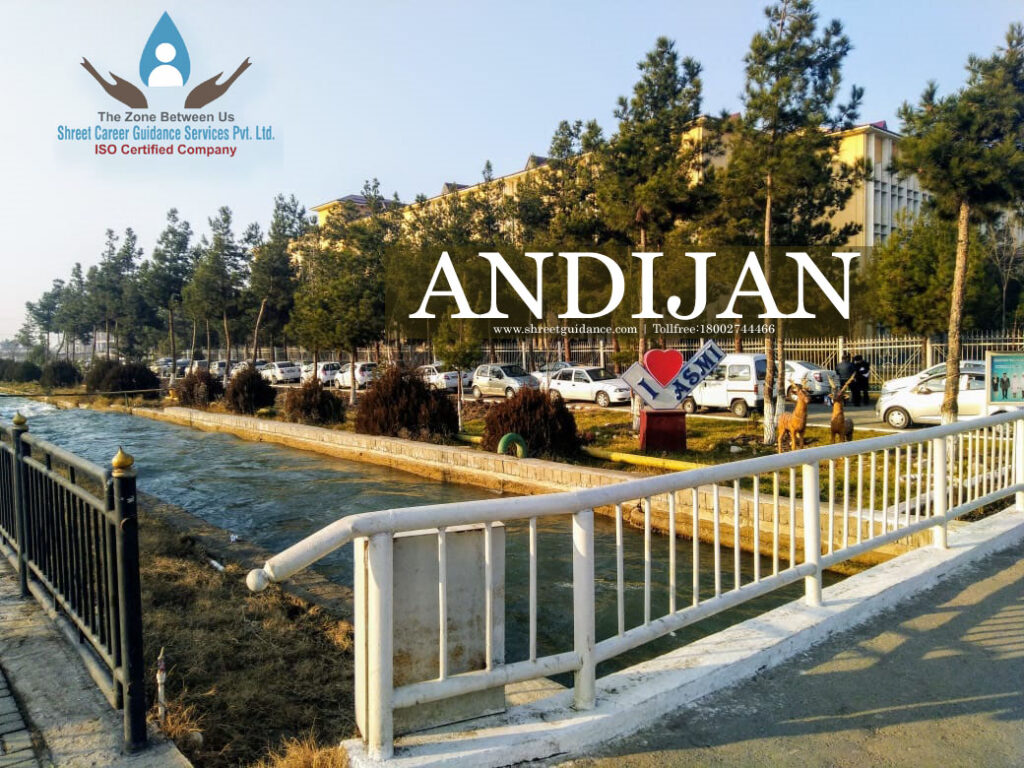 To get information about the admission process at Andijan State Medical Institute, You can contact us by filling out a “Request Information” form on our official website www.shreetguidance.com or contact directly at our registered numbers. We are top study abroad education consultants who have been assisting medical aspirants to study MBBS in Uzbekistan  at MCI approved government medical colleges of international recognition at very low fees. The advantage of studying abroad through Best admission consultancy is that they will provide you with only the best NMC approved colleges for MBBS abroadand will provide you with all the information required from filing out application form to reaching your chosen study destination and adapt to your University life.

For a detailed, MBBS in Uzbekistan fees, you can contact us directly at the contact shared below.

How to reach Uzbekistan from India

How to choose PG Medical College in India for MD/MS course?