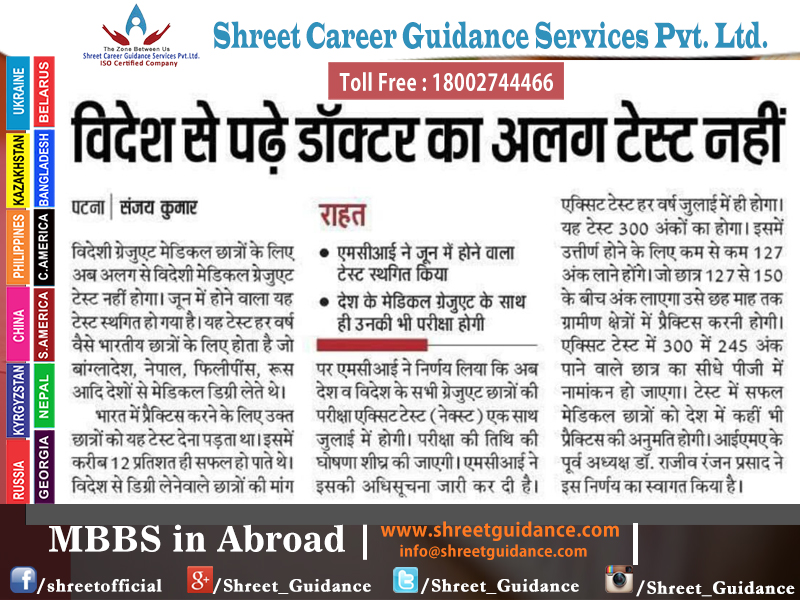 Medical graduates willing to procure a licence to practice Indian medicine systems, including Ayurveda, may soon have to clear an exit exam, according to a proposed legislation on the lines of the health ministry’s National Medical Commission Bill.

All Students who studying MBBS from foreign or from INDIA  must clear exit exam to obtain license to practice Indian medicine: Health ministry’s draft bill

This is a part of a draft bill which seeks to create a new regulator, National Commission for Indian Systems of Medicine and Homoeopathy, to replace the two statutory bodies governing higher education in homoeopathy and Indian systems of medicine.

The AYUSH ministry, in consultation with NITI Aayog, has formulated the inclusion of integrative medicine in the proposed bill which will enable AYUSH practitioners to practise modern medicines and vice versa after undergoing a “bridge course”.

The AYUSH National Teachers Eligibility will be conducted for appointment of all teachers in AYUSH institutions, a senior official in the ministry of AYUSH said.Proposed by the NITI Aayog-led panel, the draft bill known as National Commission for Indian Systems of Medicine and Homoeopathy, which seeks to replace Central Council of Indian Medicine (CCIM) and Central Council of Homoeopathy (CCH), also calls for AYUSH National Teachers Eligibility Test to bring in quality teachers in the traditional systems of medicine.

A committee under the chairmanship of vice chairman, Niti Aayog, additional principal secretary to prime minister, Chief Executive Officer (CEO), Niti Aayog and secretary, Ministry of Ayush as members examined the working of the existing regulatory bodies of Indian Systems of Medicine.

It recommended the creation of National Commission for Indian Systems of Medicine and Homoeopathy.

Further, from upcoming academic session, it will be mandatory for those seeking admission in AYUSH’s undergraduate courses to clear the National Eligibility-cum-Entrance Test (NEET).

“However, we are still exploring whether to merge the entrance exam with NEET or to have our own common entrance exam,” the official said.

For all system of AYUSH, minimum 50 % marks have to be obtained by the candidates to be eligible for admission in under-graduate courses.

The draft National Medical Commission Bill which seeks to replace the existing apex medical education regulator Medical Council of India (MCI) with a new body also calls for a licentiate exam which all medical graduates will have to clear to get practicing licences.

Confusion before ADMISSION in ABROAD???