Home Uncategorized MBBS in foreign universities, have to clear the NEET

MBBS in foreign universities, have to clear the NEET 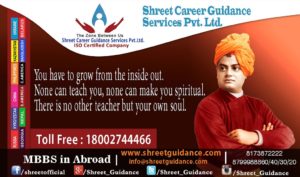 Those wanting to study MBBS in foreign universities may soon have to clear the NEET as the government plans to make the test mandatory for them so that only competent students make the cut.

According to a senior health ministry official, the proposal is at an advanced stage.

The official said that among those who go abroad to study medicine, around 12 to 15 per cent of the graduates manage to clear the Foreign Medical Graduates Examination (FMGE), a licensure examination conducted by the Medical Council of India.

“A mere 12 to 15 per cent of the graduates, who come back after studying abroad, manage to clear the Foreign Medical Graduates Examination (FMGE). If they don’t clear the FMGE, they don’t get registered to practice in India.

“In such cases, they start quackery or practice illegally which can be dangerous. So the move is aimed at ensuring only competent students get to study medicine in foreign universities,” the official said.

At present, a student who wishes to take up a medical course has to obtain an essentiality certificate from the MCI for admission in any medical college outside India.

Every year, around 7,000 students go outside India to study medicine.

Most of the students go to China and Russia.

“As per the data, the percentage of graduates who have studied abroad and have cleared the FMGE has ranged between 13 and 26.9 per cent in the last five years. This is really a matter of concern as they go out, spend lot of money of their parents and are not able to contribute to the healthcare in India once they come back,” the official explained.

Once the new proposal is approved, those aspiring to study medicine outside India will be given a No Objection Certificate (NOC) only if they clear NEET, the official said.

There were some complaints that the FMGE paper was very tough because of which those who come back from abroad are unable to clear it. But a committee constituted to review the FMGE syllabus found it to be perfectly suitable and relevant