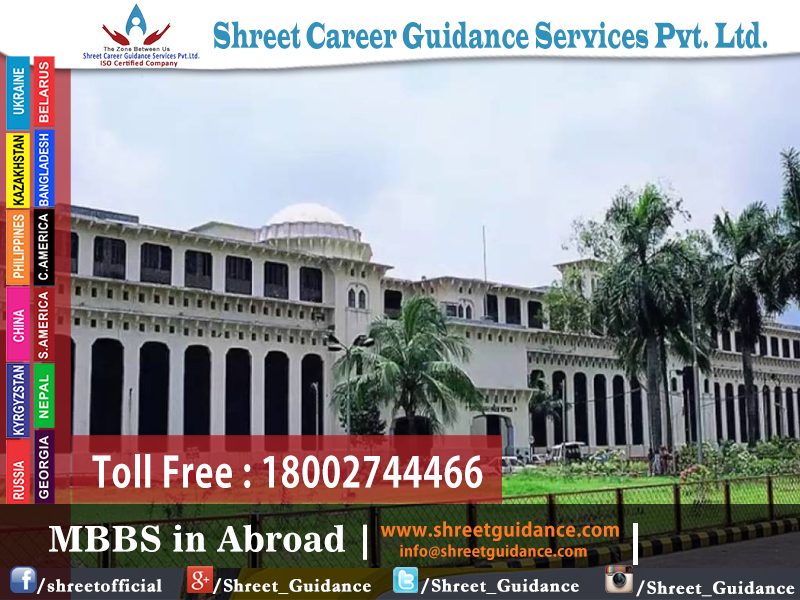 Following the 1972 independence of Bangladesh, the educational function of the Dhaka National Medical Institute became moribund, although the associated hospital remained active. A medical college capability was restored with the creation of the Dhaka National Medical College. It was inaugurated on 15 October 1994 and was opened to its first students.It has a 650 bedded multidisciplinary hospital complex adjacent to the academic building.The college offers a five-year course of study, approved by the Bangladesh Medical and Dental Council (BMDC), leading to a Bachelor of Medicine & Bachelor of Surgery (MBBS) degree from Dhaka University. After passing the final professional examination, there is a compulsory one-year internship.

Along with other programs the Non-cooperation movement urged upon the peoples of the sub-continent to boycott educational institutions established and administered by British Govt. and to establish National Schools, Colleges and Institutes for modern scientific education by the local people themselves. Accordingly two Medical School were established in the Bengal Province for producing National Doctors of modern medicine. One such Medical School was at Calcutta, named Calcutta National Medical Institute and the other at Dhaka, named Dhaka National Medical Institute.

In 1971, during the Liberation war of Bangladesh the Dhaka National Medical Institute Hospital was a safe shelter for the Freedom Fighters. Just after the liberation of Bangladesh in 1972 the hospital condition was on the verge of collapse due to financial crisis and absence of any Administrative Body as the previous Governing Body and the Trustee Board of the Institute were almost absent.

Father of the Nation of Bangladesh, Bangabandhu Sheikh Mujibur Rahman took initiative by himself to rescue the Dhaka National Medical Institute Hospital and granted a Taka of Thirty five lacs immediately for running the hospital and an Adhoc Governing Body was formed for the Institute hospital under the chairmanship of Mr. M. Sirajul Islam MLA for the smooth administration and development of the hospital. Mr. M. Sirajul Islam took active initiative to allocate a donation fo taka twenty five lacs from Bangladesh Assistance Society of India.

A rule was made by the Govt. of Bangladesh for the Dhaka National Medical Institute Hospital (DNMIH) that a Management Board will be formed henceforth for every three years of its proper administration and a yearly financial grant will be allotted for the hospital according to the need assessed by the Ministry of Health & Family Welfare, Govt. of Bangladesh. The initial financial grant for the Hospital was Taka two crore yearly. Now it is Tk. Five Crore.

From the very beginning the Management Board of the Dhaka National Medical Institute Hospital proposed and moved for establishing one Medical Collage with the DNMIH. At last in 1994 under dynamic leadership of the chairman of the Management Board of the Dhaka National Medical Institute & Hospital Mr. Sadeque Hossan Khoka MP, the long expected Dhaka National Medical College came into existence. The College was formerly inaugurated and the foundation stone was laid by the former Prime Minister on the 15th October, 1995. New Academic Building of the College inaugurated by former Mayor of Dhaka City Corporation and former Chairman of the College Mr. Sadek Hossain Khoka MP, on the 25th November, 2006. DNMC is running as per rules and regulations laid down by the University of Dhaka, Bangladesh Medical and Dental Council (BM&DC) and Ministry of Health & Family Welfare, Govt. of the People’s Republic of Bangladesh.

In the First Batch, 63 Medical Students got admitted in the College in 1994-95 session. In this session 2017-2018, 130 students has admitted in 24th batch. Already a total 1422 graduate Doctors have been passed from the college and they are working with fame in home and abroad. Now the college has emerged as one of the best Medical College in Bangladesh.